Note: Walken Through Film is a series of reviews of Christopher Walken movies, looking at the films through the lens of extreme adoration of Christopher Walken. These reviews are designed to help people new to Walken understand Walken better and to help fellow Walken aficionados find the hidden gems in what can be at times a wild and unpredictable body of work. 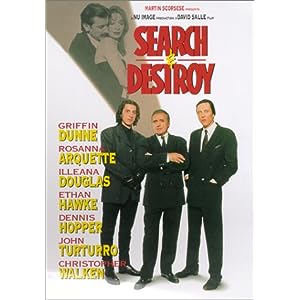 So many people, all so very wrong.

How did a movie like Search and Destroy get made with this kind of cast? How did a movie with this kind of cast fall into such obscurity? This was the first film for visual artist-turned-director David Salle; it was also his last. A critical and commercial disaster, it stars Christopher Walken, Griffin Dunne, Dennis Hopper, Ethan Hawke, John Turturro, Illeana Douglas, Martin Scorsese, Rosanna Arquette, and Dan Hedaya.

Based on a play by Howard Korder and adapted for the screen by Michael Almereyda, the plot focuses on the downward spiral of struggling entrepreneur Martin Mirkheim (Dunne), who, deep in debt, decides to pursue the rights to a self-help manifesto / young man’s adventure story, Daniel Strong, written by Hopper’s Dr. Henry Waxling. Martin has no money to buy the rights, and to make money he teams up with Kim Ulander (Walken), a bored businessman looking for a way to spice up his life. Martin amuses Ulander–enough so that soon the two hatch a plan to go buy and sell some drugs.

And like Walken says in the film, “You can’t have an adventure without a gun.”

The trouble with Martin is he didn’t realize he was in a Christopher Walken movie. Once Walken is involved, the movie blossoms into something violent and wonderful. Walken rips control of the narrative away from every other character, breaking through the film’s artifice as his character breaks away from his own soul-deadening desk job. The unshackled film turns dark and unpredictable, which is the whole point: Martin wants to make a film about a book arguing for a personal autonomy Martin isn’t brave enough to fully own–until Walken drags him through a journey harrowing enough for Martin to find strength within himself.

Walken at his best is a force of anarchistic escape from the hegemony and overwhelming dominance of the formulaic. He is freedom gone haywire, delivering every line as if it were the manifestation of an inner rebellion against all external requirements of plot or diction. He’s a force to be reckoned with in any film (his memorable turns in True Romance, Pulp Fiction, Annie Hall, and The Deer Hunter belie the paltry number of scenes he’s actually given), and often the best use of him as an actor is a film like Search and Destroy, where the purpose of his character is to derail the narrative and send us spinning into wilder terrain.

Watching Walken act, you see the total absurdity of life and a glimmer of a solution for how to survive it.  Sometimes, all it takes is a shot of him onstage making jokes about Charles Manson before doing an odd little tap-dance while Martin says to his date Marie (Illeana Douglas), “He’s my friend!” I know exactly how Martin feels.

“I’m enchanted by your optimism, and I hope all your dreams come true.”

Surrounding Walken’s wonderful performance is a stellar supporting cast. Douglas is particularly fun as Marie, an insecure-but-cheerful writer of B-grade slasher films. Her description of brains erupting and cascading down the walls would’ve been worth it all by itself, but Marie also holds nothing back when it comes to describing her heroine lopping off a monster’s “penis claw” to a horrified Martin over a would-be romantic dinner.

Sigh. A girl after my own heart. I swooned a bit. I won’t lie.

Dennis Hopper also steals several scenes as Dr. Henry Waxling, the opportunistic, greedy author of the self-help book who now hosts a late-night talk show. His advice to a dreamy-eyed Martin who shows up wanting to secure the rights to his book: “Get some money, man! Go! Get MONEY!” His advice for people who find themselves talking to someone who is in desperate need of help: “Kick ’em really hard!”

The audience is treated throughout the film to brief scenes taken from Waxling’s book, featuring the ongoing development of Daniel Strong. Daniel Strong jumps off a watefall a boy, emerging from the pool at the bottom a triumphant man, arms upraised while music trumpets his jubilant transformation. Daniel Strong runs through the forest of doubt, undaunted. Daniel Strong tests himself against the power of a nude female. All of these scenes I found smart and funny and sharply done. Along with being one of the best unseen Walken films, Search and Destroy might well be one of the most underrated satires of the last twenty years.

So why did the film fail? Most viewers (and people who I’ve made to sit through the film over the years) seem to find Martin an unlikable protagonist. For me, he works in the same way William H. Macy’s character in Fargo works: I agonize over the character’s actions as he sinks lower and lower into a personal hell while identifying with his struggle to become a credible human who can break his own cycle of failure to succeed at something in life. Griffin Dunne’s performance is brave and torturous, yet incredibly compelling. Whatever else the film is, I don’t think it’s ever dull. There’s agony or wit in every shot.

The film’s look is often cheap, but also consistently inventive and stylish, albeit in a museum-installation sort of way. I wish it was available in a high-def, widescreen format, but it seems destined to be lost to the bargain bins of video stores everywhere, and that is a real shame. The film deserves better. I’ve watched it countless times, and most of the quotes and details I’ve included in this review were accurately pulled from memory. The film has depth and value for those willing to see it.

Onto to the scoreboard!

Walken song and dance: Check! (One of my favorites that he’s ever done.)

Is it supposed to be his movie? No!

It is anyway? Yes!

A good film without him in it? Close, but not quite. Half point!

Seek out Search and Destroy.

Posts About My Books